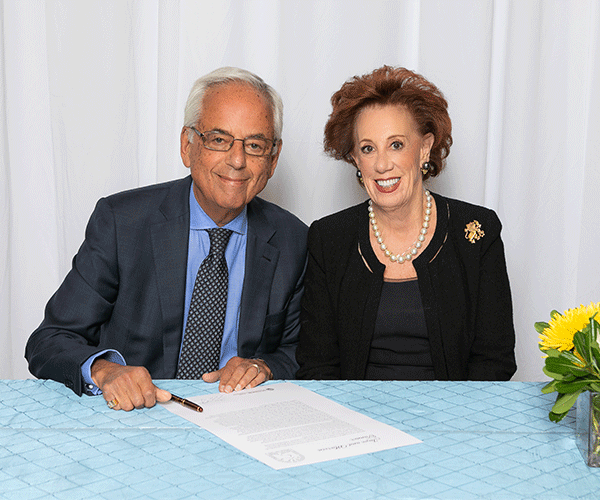 We built our lives together in Montreal and recently moved to Toronto to be closer to our family. We have been blessed with four children and 10 grandchildren. Community and philanthropy have always been guiding principles in our lives. We both began to volunteer and fundraise as young adults, and our community involvement grew from there.

We have both been involved in a variety of volunteer leadership roles, and we have found these experiences to be extremely rewarding and meaningful. We share the same values around philanthropy and volunteerism and have always supported and taken pride in each other’s work for the community. Many of our closest friendships have been built through our community involvement and our communal work also enabled us to be a part of pivotal moments in Jewish history, such as crossing the Suez Canal, advocating for Russian Jewry and bringing Russian and Ethiopian Jews to Israel.

Our community values were established early on in life. Joyce was raised in a traditional Jewish home in Montreal, and would regularly attend Shaare Zion Congregation with her grandmother and father.  She was inspired by the Rabbi’s sermons and community leadership and became involved with B’nai Brith and Young Judea.  She began to support Federation CJA in her 20’s, was part of Montreal’s inaugural Lion of Judah program, and went on to chair Women’s Campaign.   She also joined the Group of 35, a women’s advocacy group dedicated to the plight of Soviet Jewry, which led her to march on Washington and visit dissidents in Leningrad and Moscow in the 1980’s.

Marvin grew up as the elder of two brothers in a European Jewish family in Ottawa.  He was raised with a deep sense of Yiddishkeit and a strong work ethic.  He began working at age 16, later moving to Montreal where he started a small business as a specialty supplier to drug and food stores. As his company grew, Marvin had the opportunity to work with many influential community leaders who invited him to serve in a variety of leadership roles. He became a passionate fundraiser and advocate, sitting on the Board of Federation CJA in Montreal, serving as Chairman of the Weizmann Institute and leading a successful capital campaign as the President of the Montreal Holocaust Museum.

We feel fortunate to have had the opportunity to give back through our philanthropy and volunteerism. The time and resources we have committed to community have come back to enrich our lives in so many ways. Through our gifts to the Jewish Foundation, we hope to continue to make a positive impact for generations to come.