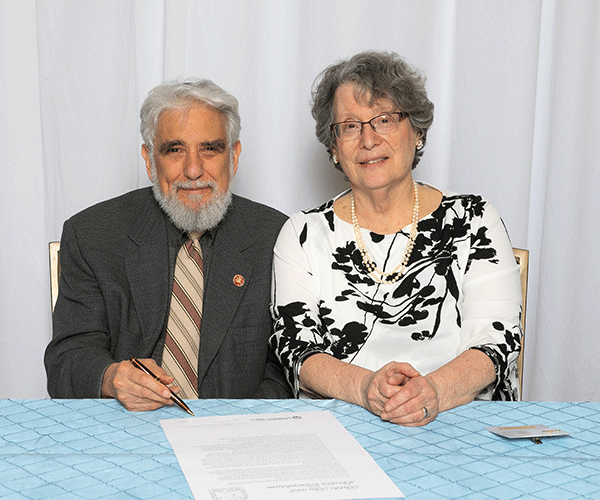 What does it really mean to live “Jewishly”?  To feel Jewish, and to find a path to Jewish life?
In our family, there are many answers to this question.

Roy grew up in Erie, Pennsylvania, in a Reform Jewish household. Long standing members of the Reform Temple, their observance was in that style. Judaism was integral to Roy’s childhood, punctuated by holiday observance, a dear Rabbi, and dinner table talk of all things Jewish.

Roy’s father ran a used furniture -- and ‘everything’ store and taught Jewish ethics in Sunday school for years. His integrity and generosity permeated all he did, and when his store ceased being profitable, he kept it running so as not to put his employees out of work. These life lessons had a tremendous impact on Roy.

Loretta grew up in Newark, New Jersey, in a Jewish neighbourhood, but with little exposure to Jewish observance at home. There was no talk of Israel, of Jewish issues, and no shul membership. The family did have Seder, run by her grandpa. As a child, Loretta repeatedly made anonymous tzedakah donations to the summer camp fund for inner city children. With a need for more Jewish connection, she took Hebrew language in high school and two years after graduation travelled to Israel for a year of study at Machon Greenberg. She met Roy on the boat and they married in Israel just months later.

Roy studied at Hebrew Union College, where Loretta joined him for two years of classes, at a time when women were not accepted for a graduation track. Although ordained Reform, Roy quickly moved to the Conservative movement, and adopted a traditional approach. He served several Conservative congregations through the years, coming to Toronto in 1996.

Our lives continue to be defined by Jewish values: learning, community, family. With five children (Rabbi Miriam, Keren-Ami, Israel, Tova and Shaina), 17 grandchildren and (so far) three great-grandchildren, we have nachus in knowing that our children embody the values we hold so dear.

We have designed our gift to the Jewish Foundation so that when we pass away, the oldest grandchild from each family will decide together how to allocate the funds.

Our message for future generations comes from two well-known quotes:
You make a living by what you do, but you make a life by what you give.
And…while you are not required to finish the task, neither are you free to desist.