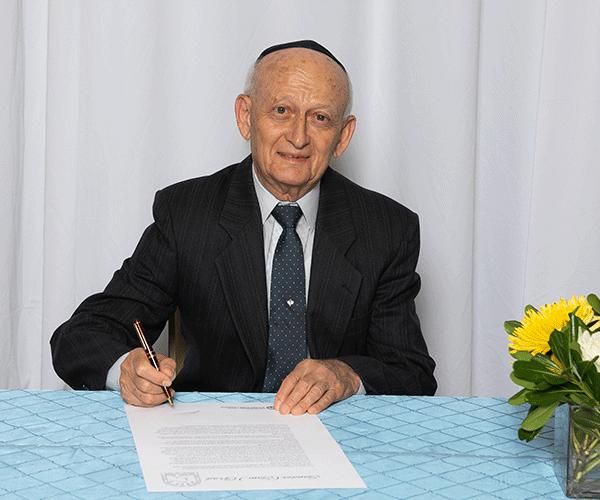 I was born in Hungary in 1931. In the mid-1930’s my family moved to the newly established city of Tel Aviv. After my sister’s tragic death from pneumonia, we left Tel Aviv, heartbroken, and returned to Hungary in 1936.

In the Spring of 1944, along with most Hungarian Jewry, we were deported to Auschwitz/Birkenau. My mother and three younger brothers (each born after 1936) were sent immediately to the gas chamber. A Jewish Sonderkommando noticed me and recommended that when asked my age, I should say I was 16, even though I was 13. This lie saved my life as I was selected for forced labour.

I was a prisoner in Jaworzno until January 1945. The day before it was liberated, most of the prisoners, including me, were forced on a death march. We marched for three weeks in treacherous conditions, with scarcely any food, as the Allied Forces closed in. We were then placed in open railway cars for two days without any food. One of my friends had a gold ring and showed it to a Nazi guard. The guard took the ring and gave my friend half of his sandwich. My friend then divided the half sandwich in four equal parts so he, myself and two others could be nourished. My friend’s critical act of kindness helped save my life.

After I was liberated in April 1945, I returned home hoping to find any surviving member of my family. At first, I was told that my father had also perished. In fact, I had been saying kaddish for him for two months when I learned that he had indeed survived and was in a hospital. We were reunited.

I moved to Israel in 1949 and proudly served in the army and established a successful working life. But when my father and his new family fled Hungary, I chose to join them as they made their way to Canada in 1957.

I met my wife Josephine z”l a few years after settling in Toronto. We raised three wonderful children: Cynthia, David and Alan. We became grandparents and I am now a great-zaidy. Despite the struggle and loss in my early life, I made sure to emphasize kindness and compassion in my family, with my friends and in my business. My life, in extreme cases, was saved thanks to others’ acts of kindness and I am committed to threading the values of tzedakah and tikkun olam throughout my life. I remain hopeful because I have passed this onto my children and grandchildren.